All of the sudden I found myself in a situation that I have been successfully avoiding so far - I needed to make a C++ library with CMake. 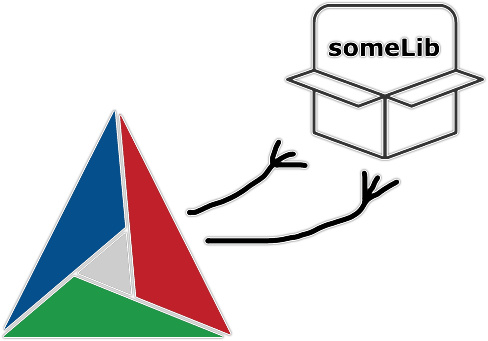 To clarify, this will be about so-called normal kind of library.

For the sake of focusing on CMake side of things, the library itself is very trivial:

This particular folder structure is not enforced, but I’ve seen it being used around and I think it serves nicely for the purpose of keeping library files organized. Following this structure, you put internal library sources and headers to src folder, and public headers go to include folder.

Public headers is something other projects will use to interface with your library. That is how they will know what functions are available in it and what is their signature (parameters names and types). So, include/some.h is a public header, and here are its contents:

So our library has just one function. Its definition is in src/some.cpp:

As you can see, this function just prints a message to standard output. The someString variable comes from internal header src/things.h:

Making a library with CMake is not that different from making an application - instead of add_executable you call add_library. But doing just that would be too easy, wouldn’t it.

Here are some of the things you need to take care of:

Everything from this list is handled by CMake. So let’s gradually create a CMakeLists.txt for the library project.

Knowing that, here’s how you can check if you are in the top-level project or not:

Why even bother with this? Because later we will be setting certain properties for the target (our library). And I saw in lots of places how people copy-paste project name value to every command, which I believe is just a bad idea - it is much better to use already defined PROJECT_NAME variable instead, innit.

Here go the library target and its sources:

Here the library is defined as STATIC, but there will be a section about shared libraries too.

Setting include directories correctly with target_include_directories is very important:

Paths in PRIVATE section are used by the library to find its own internal headers. So if you would place things.h to ./src/hdrs/things.h, then you will need to set this path to ${CMAKE_CURRENT_SOURCE_DIR}/src/hdrs.

Paths in PUBLIC section are used by projects that link to this library. That’s where they will look for its public headers:

Certainly, just building the library is already enough to be able to link to it, but we want to do it in the most comfortable way: not by providing paths to its binaries and headers from both build and sources directories, but by installing just the artifacts we need and using find_package command.

With find_package you let CMake to worry about finding the library, its public headers and configuring all that. Here’s a more detailed documentation about how find_package works, and here’s how you can create a CMake config of your own.

First thing to think about it is the installation path. If you will not set it during configuration step via CMAKE_INSTALL_PREFIX (-DCMAKE_INSTALL_PREFIX="/some/path"), then CMake will set it to some system libraries path, which you might not want to use, especially if you are building your library for distribution.

Here’s how you can overwrite default installation path to install the artifacts into install folder in your source tree:

Next thing you need to do is to declare PUBLIC_HEADER property:

Not related to public headers, but it might be a good idea to add d suffix to debug binaries - that way you’ll get libSomeLibraryd.a with Debug configuration and libSomeLibrary.a with Release. To do that you need to set the DEBUG_POSTFIX property:

The NAMESPACE property is exactly what is looks like - a namespace of your library. I reckon, that will help to avoid names collision, but most likely it will allow to group stuff in the namespace similar to how Qt does it:

Go to library source tree root and run the usual:

Note that SomeLibraryConfig-noconfig.cmake has this weird noconfig suffix. This is because we ran configuration without specifying the build type - better to explicitly set it then, both Debug and Release:

So there you have it! The library has been successfully built and nicely installed, so now you can just zip the install folder contents and distribute it to your users.

Linking to the library

Now let’s see how your users or yourself can link to the library.

The PRIVATE keyword means that the library will be used by this project, but it will not be available to other projects via this project’s interface. For example, if this project is in turn a library itself, then yet another external/parent project linking to it won’t be able to use printSomething() function from the underlying library.

Let’s now try to build and run the application:

But what if we have our library as a part of some other top-level project, so the library lives in its source tree? Do we still need to build it first and add it to the main project via find_package? Not exactly - now there is no need to “find” it: the library will be built together with the parent project and then linked to.

Yes, it is all the same as with external project - we just need to link to the library. No crazy relative paths, just the very same target_link_libraries.

But this time we don’t need find_package and also we don’t need to provide the namespace. That last part I don’t entirely understand, but perhaps that is because everything in the project is supposed to be within the same namespace already?

Following add_subdirectory statement, we get to libraries folder, which also has a CMakeLists.txt:

And there we get to our library project.

While the code here is the same as the one from external project, there is one notable difference - some.h is not prepended with SomeLibrary/ in the #include statement.

Why is that, why is it different from the way in was included in external project? Well, it is because that is how this header is placed in the library’s source include folder - there is no SomeLibrary folder nested there. But when you install the library, then there is SomeLibrary folder inside include in the installation folder, so in that case you need to add SomeLibrary/ to #include statement.

I wasn’t sure if that is really how things are, so I went and asked about this on StackOverflow, hoping that there is perhaps some way to handle this in a unified way, but the answer was:

You think too "magically" about what CMake can. CMake just calls a compiler/linker with proper parameters. A compiler requires for #include

So if you would like to unify the way you include the library’s public headers both in external and internal projects, then you’ll need to create SomeLibrary folder inside library’s source include folder (yeah, to get the ugly SomeLibrary/include/SomeLibrary path) and adjust the library’s CMakeLists.txt accordingly.

Do the usual in the project source tree root:

Library as a target

We can also build and install just the library, without building the entire project. Aside from just going to the library folder and running CMake from there, you can actually do it from the project root - by setting --target option on build:

Here you can also see how you can install a single target with --install option - by pointing it to the target folder inside build folder. Also note that install folder is now on the project’s source tree root level, not in the library’s nested source folder.

You can set a version for your library (cmake-library-example/internal-project/libraries/SomeLibrary/CMakeLists.txt):

As a result you will get one more CMake config file in the install folder: SomeLibraryConfigVersion.cmake.

If you now try to find the package in external project (cmake-library-example/external-project/CMakeLists.txt) like this:

then you will get the following error on configuration:

A little practical example: let’s build our library as static, link to it from external project, then build it as shared and link to that one.

To make our library shared, simply replace STATIC with SHARED in add_library statement (in the library’s CMakeLists.txt).

So, first thing that is different about resulting executable (another-application) is its size:

Not a very noticeable difference (remember that our library just prints a line of text), but it is there: statically linked executable is bigger, because the library is “bundled” into it.

Secondly, if you now rename or delete libSomeLibrary.dylib (libSomeLibrary.so, SomeLibrary.dll), then trying to run this dynamically linked application you’ll get an error like this on Mac OS:

So in case of a shared library on Mac OS or Linux it has to either stay available in its installation path, or be placed into the one of the system libraries paths. Be aware that simply copying it to the same folder with executable won’t work, unless you set the LD_LIBRARY_PATH variable on Linux (or DYLD_FALLBACK_LIBRARY_PATH/DYLD_LIBRARY_PATH on Mac OS) before running the application:

And on Windows it will fail even if you haven’t touched the library in its install folder, however you can just copy it to the same folder where executable is, but more on that below.

Shared libraries on Windows are a special thing. There it is not enough just to replace STATIC with SHARED in add_library statement.

If you build and install it having done nothing else, then you will get this error trying to configure a project that needs to link to it:

As I understood, in order to produce it, in past it was required to add __declspec compiler directives to every public single class or function declaration in your library sources, which is quite a bummer, especially if you have a lot of those. Here’s one example of how this is done.

Fortunately, starting with CMake 3.4, this is no longer required. Instead you can just set the CMAKE_WINDOWS_EXPORT_ALL_SYMBOLS option when configuring the library:

If you haven’t set SHARED in add_library and it also doesn’t explicitly state STATIC, then you can also set -DBUILD_SHARED_LIBS=TRUE option to make that library SHARED.

Either way, now you can build and install the library as usual. However, if you are using Visual Studio CMake generator, then -DCMAKE_BUILD_TYPE won’t work, because you need to specify configuration on build step:

After that configuring and building the external application will also succeed, because now it will get that missing SomeLibrary.lib.

However, unlike Mac OS and Linux, trying to run the resulting application will fail even if you haven’t touched the SomeLibrary.dll in the install folder:

or, if running from Git BASH:

That is because on Windows you need to explicitly put the DLL either to the same folder where the executable is or somewhere in PATH.

Later I will probably update the article, because, like I said, here I touched only “normal” libraries, but there are also other kinds. Plus, one can go further than just making a CMake config and create a proper package. So there are quite a few things left to talk about.

You might have noticed that most of the stuff I was doing on Mac OS, but actually everything (library and sample applications) builds and works just fine also on Linux and Windows.

Full source code of the library, its parent project and external project is available in this repository.