At some point (beginning of 2020 year) Qt installer started to require users to have Qt Account (again), otherwise you can’t proceed with the installation. More details in the Qt’s official blog post. 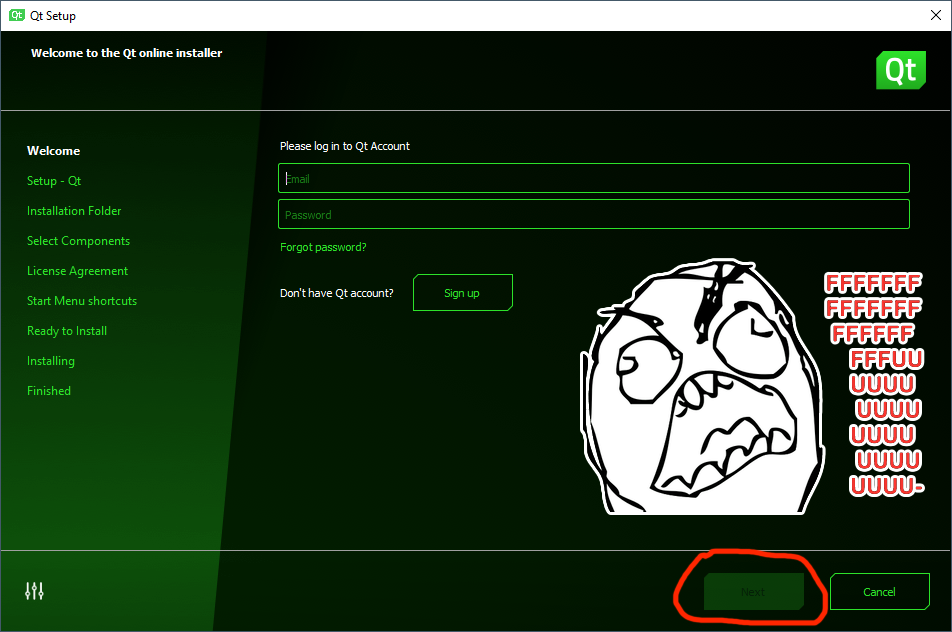 That’s something that already happened before, but back then community got really mad about it, so The Qt Company reverted that, and installer started to work without Qt Account. And now they fucking did it again, and apparently this time community wasn’t that mad (or there is nothing left of that community after all the stunts The Qt Company has been pulling over the past years).

Anyway, I won’t tolerate such anal-probing, so The Qt Company (or rather its management) can go fuck itself, and I’ll be just building Qt from sources - it’s not that scary as it sounds.

In the very same blog post The Qt Company stated that LTS releases will be only available to commercial users, so The Qt Company can go fuck itself twice at this point. Aw, geez!

Just to clarify and to TLDR the article: it’s not about pirating the binaries, it’s not about some hack or anything shady at all - everyone can get the Qt sources and build whatever version they want. And certainly, you’ll still need to comply with GPL/LGPL terms (depending on components that you’ll be using).

Getting the Qt sources

Go to the Qt’s Git repository. Find the latest (or whichever you need) release - it’s hard not to notice that branches match releases, so 5.15.2 branch is the latest release at the moment (03.12.2020).

That’s not the entire source code just yet, as Qt is divided into modules and first you need to initialize/download them. This is done with init-repository Perl script, so you’ll need to have Perl installed and available in your PATH.

By default it will initialize a lot of modules (essential, addon, preview, deprecated), and it will take quite some disk space (and time) to initialize all of them. Here’s the full list of default modules (the script prints it out):

I don’t want preview, deprecated and obsolete groups, and also I don’t want quite a lot of some other stuff, so I ran it like this:

It took 40 minutes (with my 3 MB/s connection) and 3 GB to initialize such a list. Be sure to check it in case you might actually need some modules which I excluded here.

Or you can just get a source package ZIP archive from the download page. That will be actually much faster, and even though you can’t choose modules here, later you’ll be able to skip building unwanted modules with -skip option (-skip qtwebengine, -skip qtactiveqt, -skip qt3d and so on).

Now when you have the sources, you can just build Qt and get the same binaries that are installed using installer.

I’ll describe the process for Windows 10 and Visual Studio 2019 / MSVC 142 (assuming that you have all that), but it will be almost the same with different toolchains and on other platforms too.

Let’s say you have downloaded/cloned sources to c:\Users\YOURNAME\Downloads\qt and you would like to install Qt to d:\programs\qt. Open x64 Native Tools Command Prompt for VS 2019 and there:

Choose and accept Open Source license terms (if you do accept those) and wait for the configuration to finish. Note that this will give you release build, so don’t forget to set your projects to release configuration too. Also be aware that by default Qt is built for dynamic linking, and if you need static linking, then you need to add -static option too.

By the way, I have a more detailed article about building static Qt from sources, although the only difference there is basically just this -static option.

Anyway, once it’s configured, run the build and then install using jom (you do have jom, don’t you):

It took about 1 hour to build and 10 minutes to install the binaries. The resulting size of the installation folder (d:\programs\qt) is 143 MB.

Out of curiosity, I also built Qt with sources from source package ZIP archive and the same configuration options (so it built also all the stuff that I excluded with modules), and there it took a bit longer than 1 hour and resulted in 193 MB of installation folder. So actually simply downloading the source package and keeping all the modules can save you quite some time, and 50 MB of difference doesn’t seem to be significant enough to not to do so.

Using your own Qt build

This is it, you can already use this your very own Qt distribution to build your projects.

With CMake and bare CLI

I have an article about that already, but there it’s more about CMake and Visual Studio Code, so here will be a shorter CLI-only version.

Say, you have some Qt Quick project with CMake and the following CMakeLists.txt:

Configure and build the project:

So it’s all good: CMake found your Qt installation and successfully built the project.

Try to re-configure the project with explicitly set x32/x86 architecture:

Most likely you’ll want to use your Qt build in Qt Creator.

The Qt Creator installer is also available at the official download page. Good news that installer does not require Qt Account (yet?). Actually, it does, but only if it discovers internet connection - it that case the first installer view looks like this at the moment: 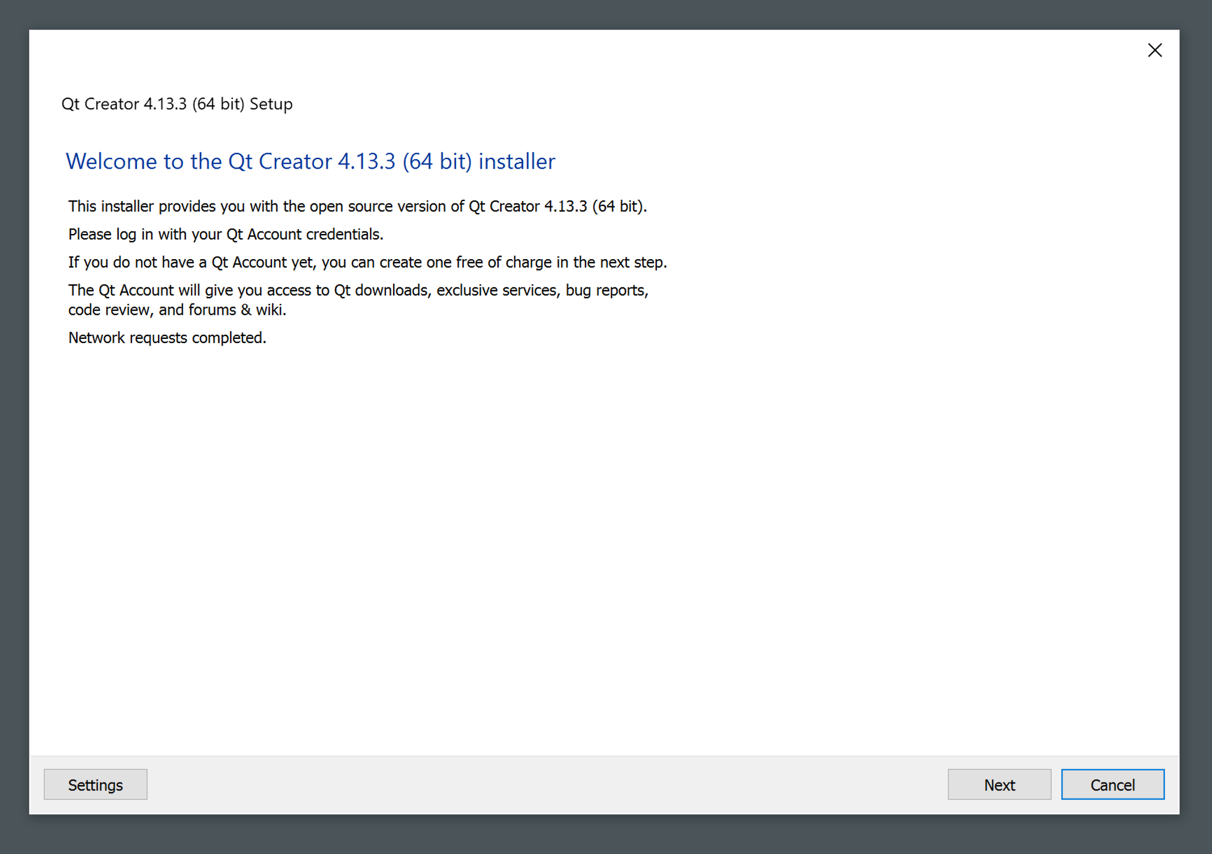 So you can just disconnect from the internet or block any network access for the installer before launching it, and then the first view will look like this: 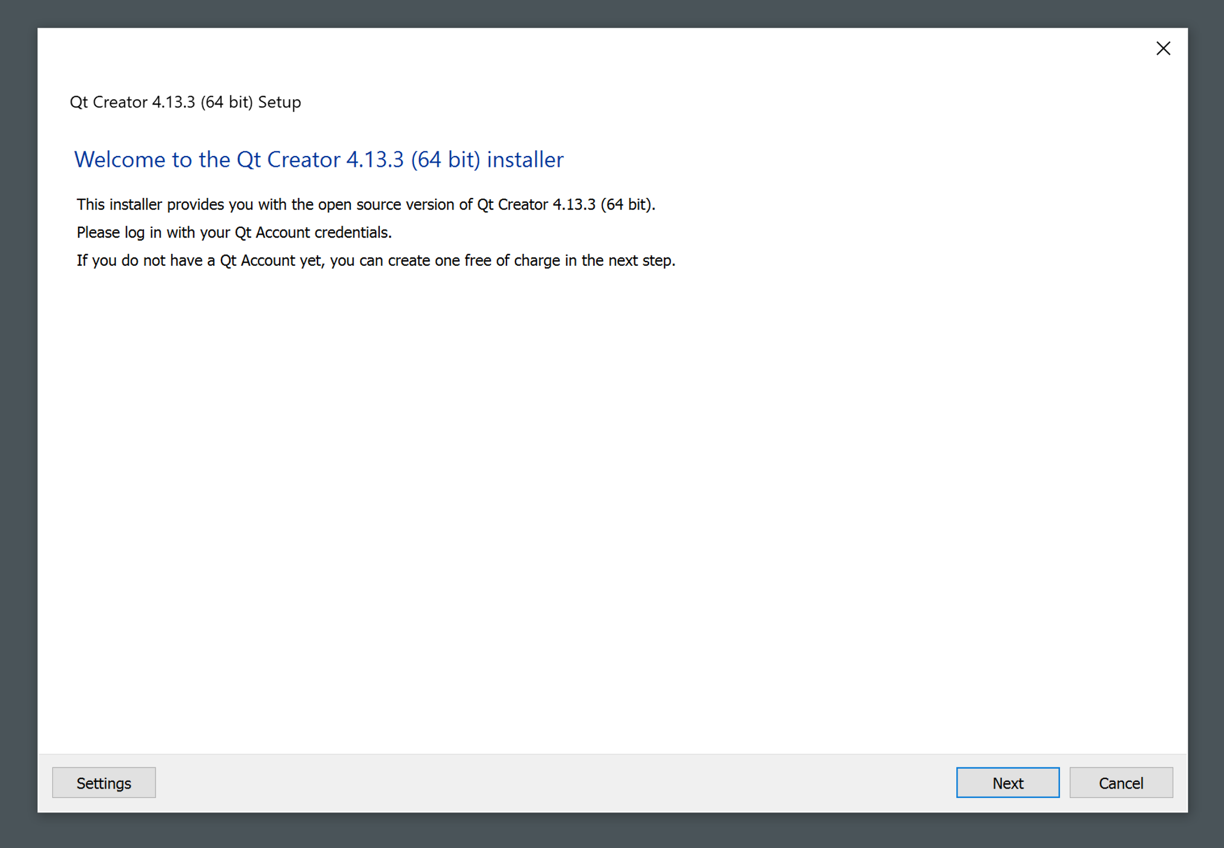 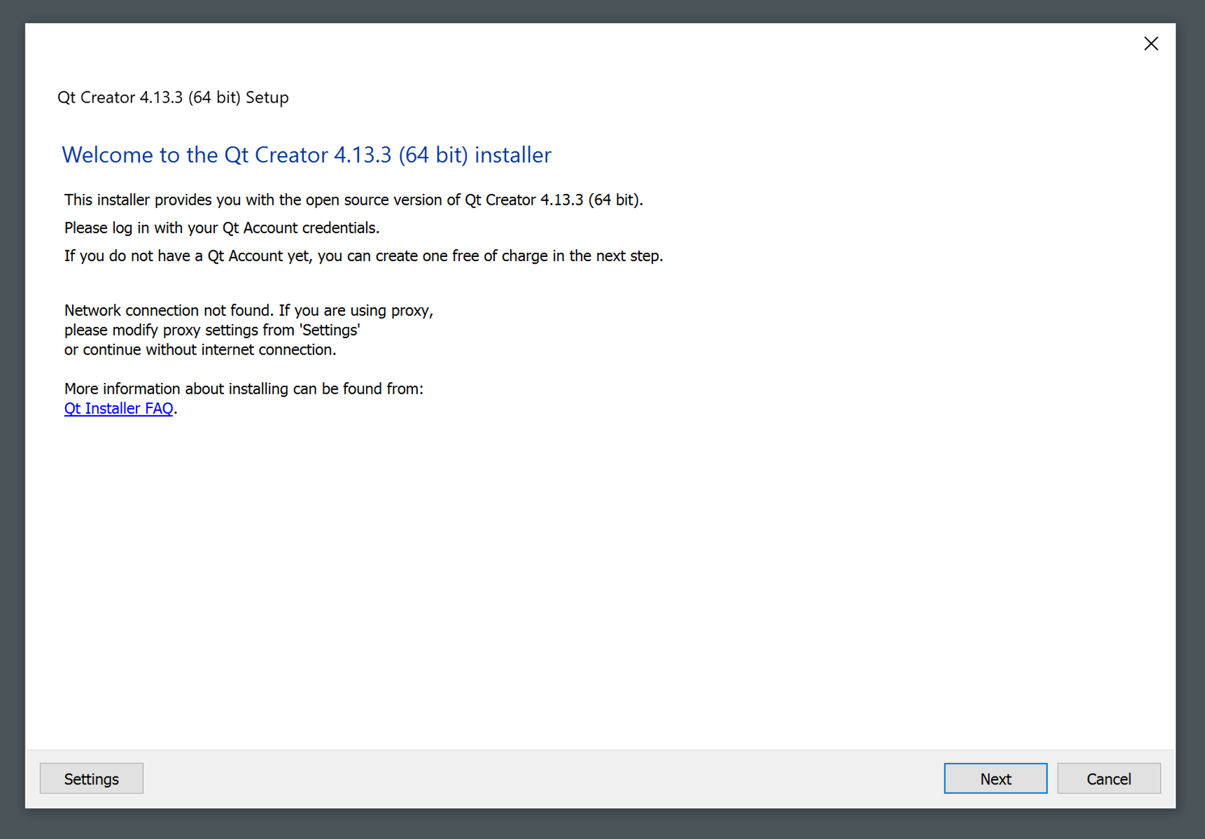 So you’ll be able to proceed without Qt Account.

And if you are brave enough, you can of course build it from sources as well.

If you, like me, are using MSVC toolchain and CDB, then it is important to check CDB Debugger Support and Debugging Tools for Windows components: 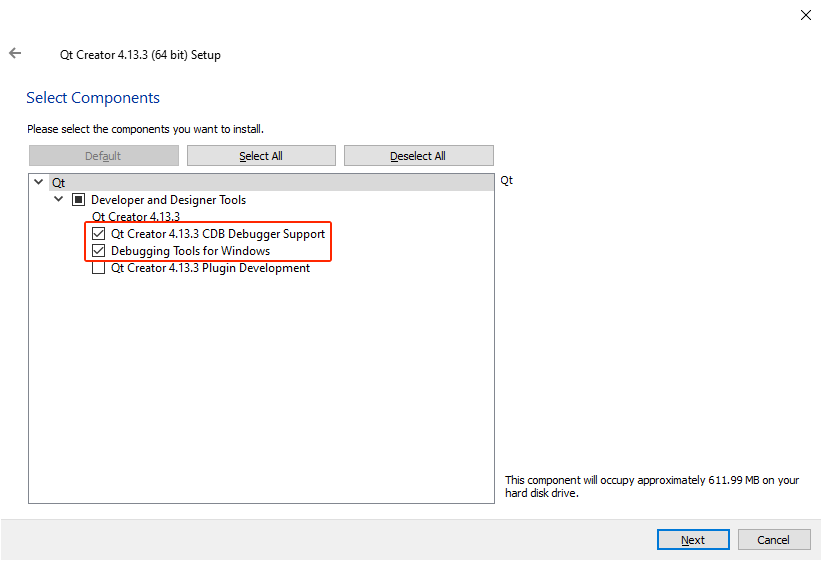 First time you launch Qt Creator, it will suggest you to “link” existing Qt installation, which is nice. But what does it actually want - I have no fucking idea, because when I pointed it to my Qt build, it didn’t enable Link with Qt button:

To hell with this thing then.

Open Qt Creator settings, go to Kits and there to Qt Versions. Add your Qt build here (you’ll need to provide path to d:\programs\qt\bin\qmake.exe). Click on Apply button, otherwise versions list on the Kits tab won’t have it.

Now go to Kits tab and add a new kit. Select your Qt version, C and C++ compilers (in my case it’s amd64 variant) and debugger (CDB). If you haven’t installed CDB Debugger Support and Debugging Tools for Windows, then you won’t have CDB option available.

If you won’t set debugger, you’ll get a yellow warning. To get details about what’s wrong, hover your mouse over it and there will be a pop-up tooltip with some explanation: 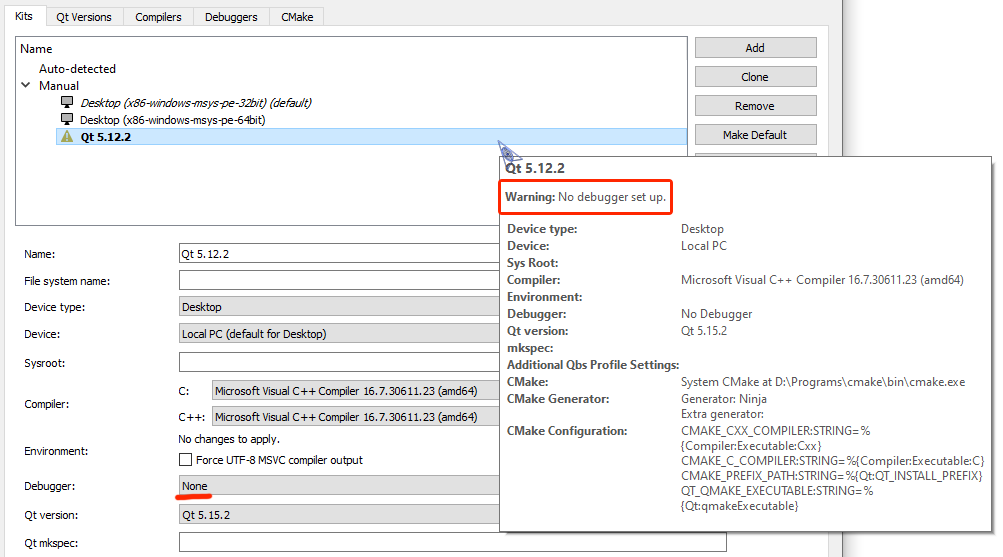 Despite it’s just a warning, you nevertheless won’t be able to select this kit in your projects.

If you’ll set a wrong compiler, then you’ll get a red error and the following explanation in the pop-up tooltip: 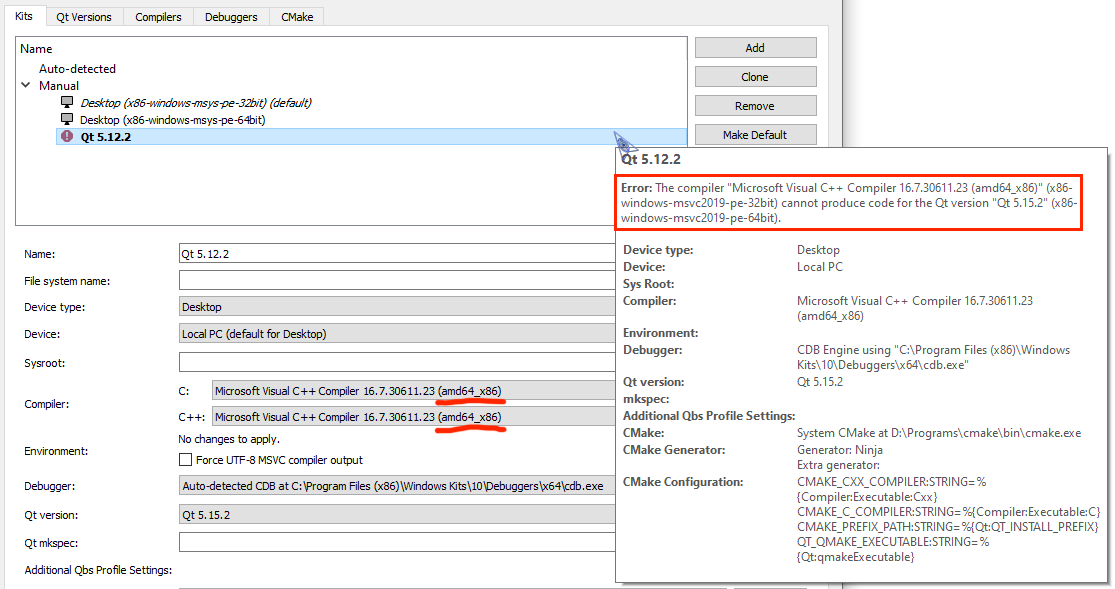 And if everything is good, then the kit won’t have any yellow/red warnings/errors: 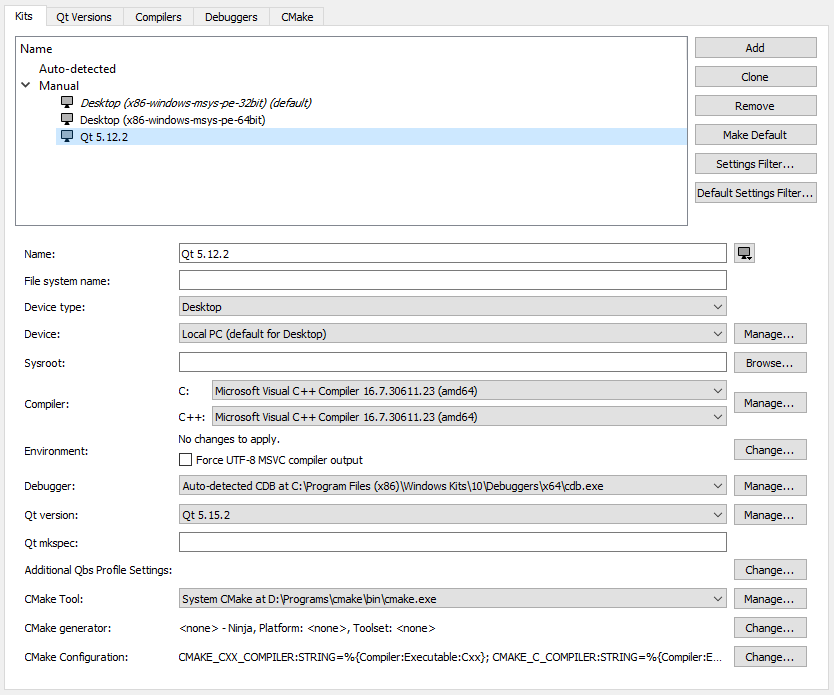 So here you’ve got a perfectly splendid Qt installation without using the installer and creating Qt Account. And The Qt Company’s management can go fuck itself for the third time now.