Embedded World 2017 is an annual event about embedded platforms and everything related to it. Here you can find hardware vendors (development boards, devices, micro-controllers from Intel, NVIDIA, Toradex, NXP, Qualcomm and others), software companies (operating systems and frameworks from Microsoft, QNX, Green Hills, Wind River and others), and also lots of service companies.

And of course The Qt Company participated as well.

Development for embedded platforms is a priority for The Qt Company, and this year we had the biggest stand - 200 square metres - just like Microsoft and Intel. Beside our stand you could find Qt on the other companies stands too (including Microsoft), simply because they used Qt in their products (for example).

By the way, walking around the venue we’ve met one service company called sequality, which was showing the QML vs. HTML comparison. Of course, we interviewed them right away. What they did is that they implemented the same application first in HTML (AngularJS) and then in QML, and developer was not familiar with QML before:

I wish, more people would watch this video, especially manufactures of STBs and in-flight media systems for planes.

Beside the “standard” set of demos (Boot to Qt, profiling and debugging on embedded platforms, Qt SCXML) there were some new ones.

There is no much photos and videos in the post, sorry about that. I was counting on the special dude with the camera who was filming everything, but those materials are still being processed and should appear on the event’s page at some moment (but knowing our marketing, I doubt it).

Announced in June 2016 Automotive Suite is a framework for creating digital instrumental cluster (IC) and in-vehicle infotainment (IVI) for cars, and it is getting a more clear shape.

In the “automotive” part of the stand there was a demonstration of joint work of RTOS INTEGRITY (for instrumental cluster) and Embedded Linux (for IVI - Neptune UI, managed by hypervisor on the same head-unit, having application manager and some applications pre-installed: navigation, media player, etc. Sure thing, IC and IVI were displayed on different screens. Here’s a photo of the demo (not from the actual event, but it is almost the same one): 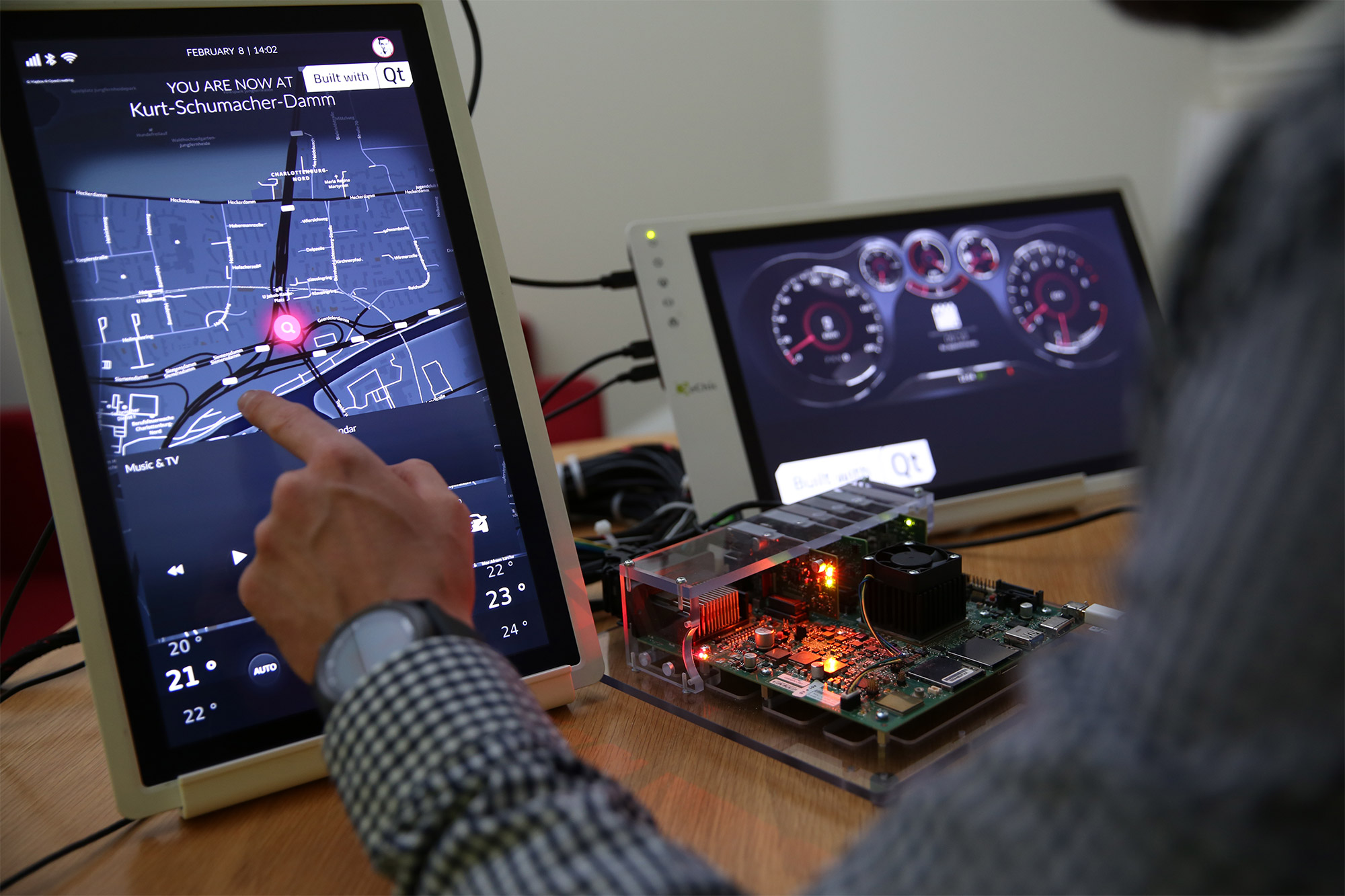 And of course fast-boot demo using Boot to Qt was demonstrated as well:

Qt Configuration Tool is a tool for cunfiguring Qt build. It was showed how to exclude unwanted components simply by unchecking them from the components tree, which would results in reconfigured Qt build with smaller binaries size.

Qt 3D Studio - former NVIDIA DRIVE Design Studio. The current state of the tool was presented, showing an example of creating a simple template for IVI, and interaction with the result from QML. I will tell about this with more details in one of the next articles.

If you can call it like this. That was just a simple sensor with gyroscope that sends data via Bluetooth to the control device, which displays it as charts and graphic visualization, simultaneously sending this data to the server. And there is also an Android tablet with an application that is connected to this server and also displays the data as charts and graphic visualization (same as control device).

Sounds not very impressive, but it looked more interesting - with this sensor you should assemble a Qt logo from 3 rotating elements on the screen. Each element was rotated by the corresponding axis from the sensor. And as I said, all changes were reflected on the Android tablet as well, which is exactly the purpose of this demo - in industrial automation quite often you have a situation when some devices are widely distributed all over the territory of the factory, and an engineer should control all of them from his (mobile) workstation.

Beside showing demos, we were also answering questions from visitors. Still we get questions like: “…So, Qt is not just an UI-framework for Linux? You do something for embedded too?”

On our stand we had not only The Qt Company’s stuff, but also booths from our partners: KDAB, froglogic, Witekio, brightONE, basysKom, e-GITS, Toradex, LinkMotion. And in addition we had products from our clients: Rimac and Ulstein.

KDAB showed a tool for introspection of Qt-applications - GammaRay: 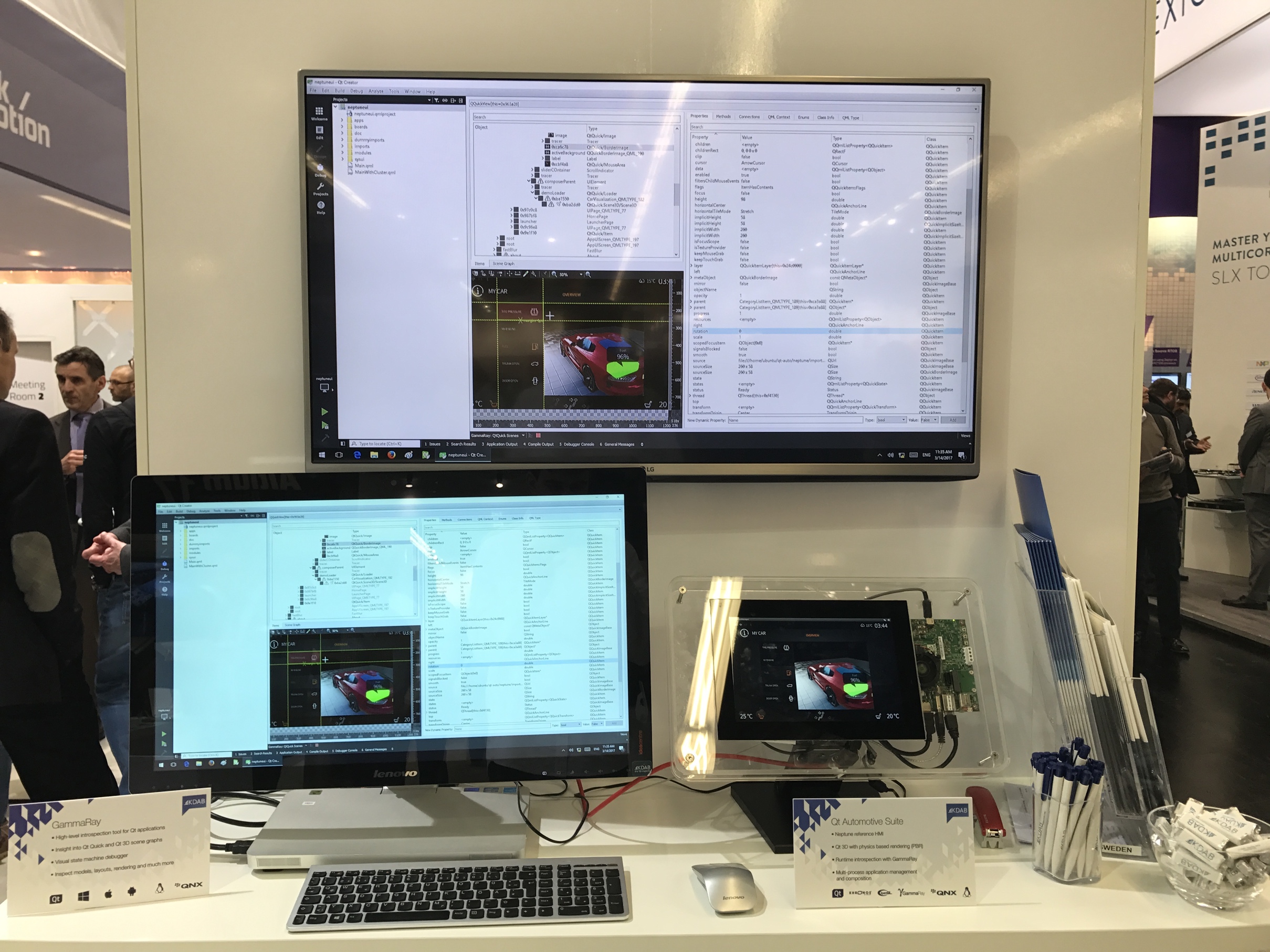 And also they demonstrated some abilities of augmented reality for car diagnostics - the car had QR-codes, and you could point the camera of tablet to any of them and see “augmented” 3D model of the corresponding component, like engine.

They showed Squish - a tool for testing that allows to create GUI-tests, and not only for desktop applications, but for embedded platforms as well. 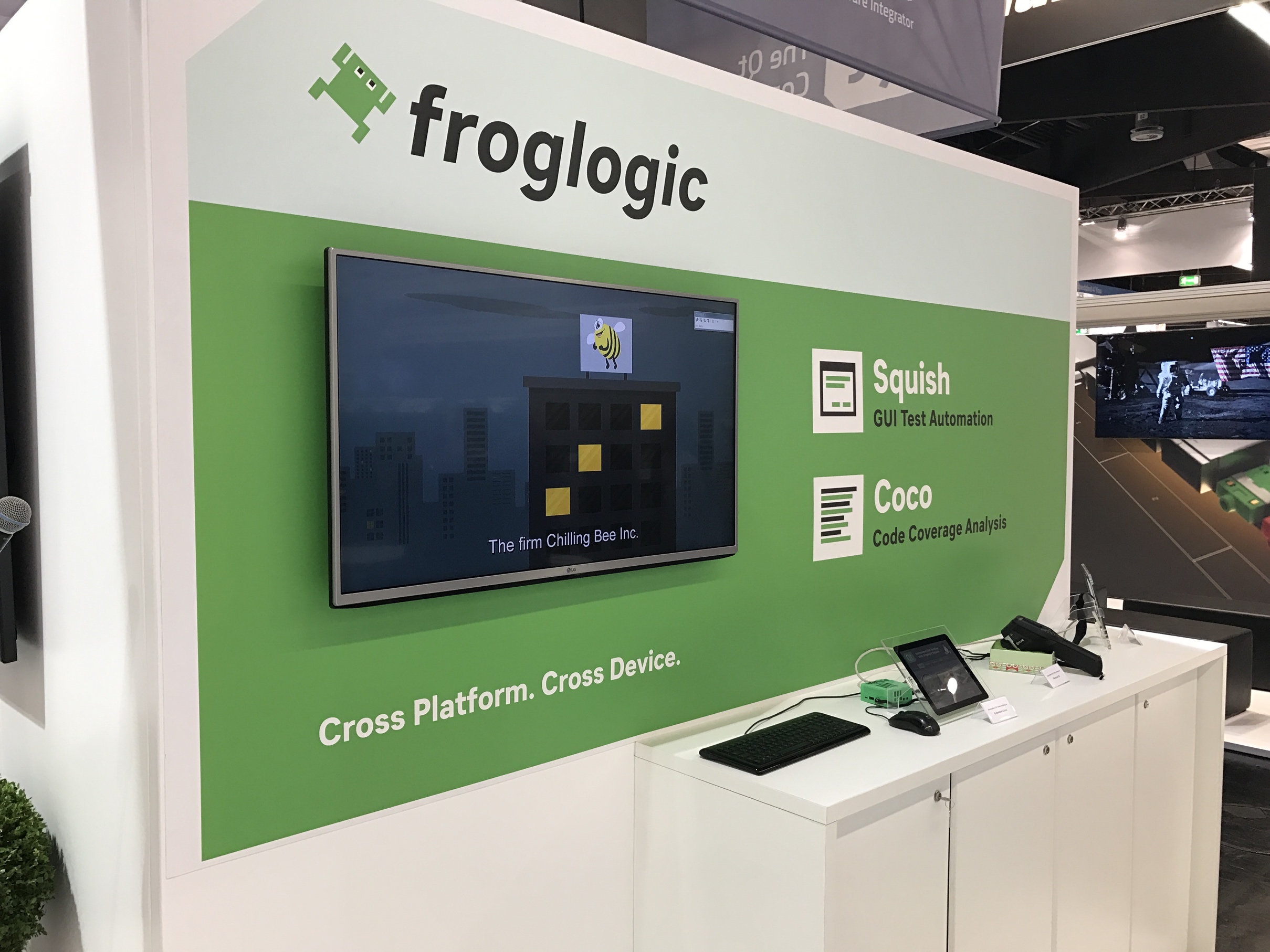 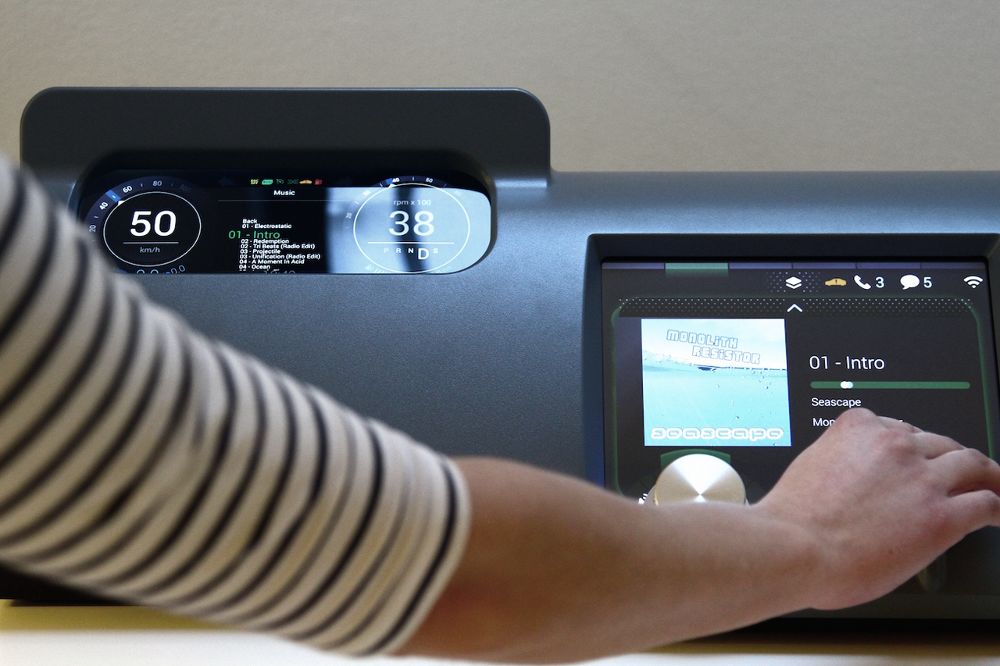 Rimac is a cool automotive company from Croatia, the creator of electro-super-car that beats Porshe 918 and LaFerrari. They brought their Concept One, which was demonstrated in the center of the stand: 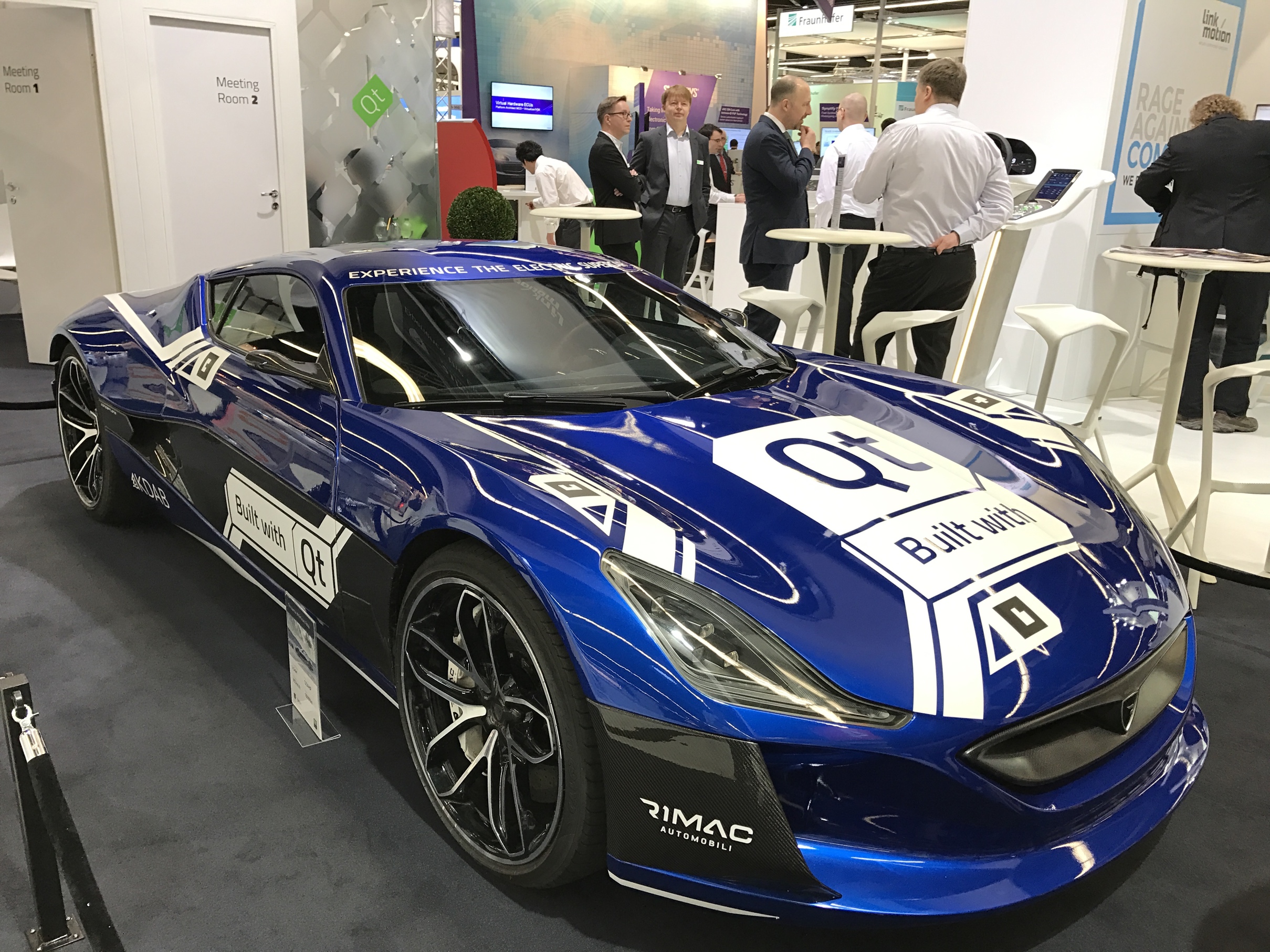 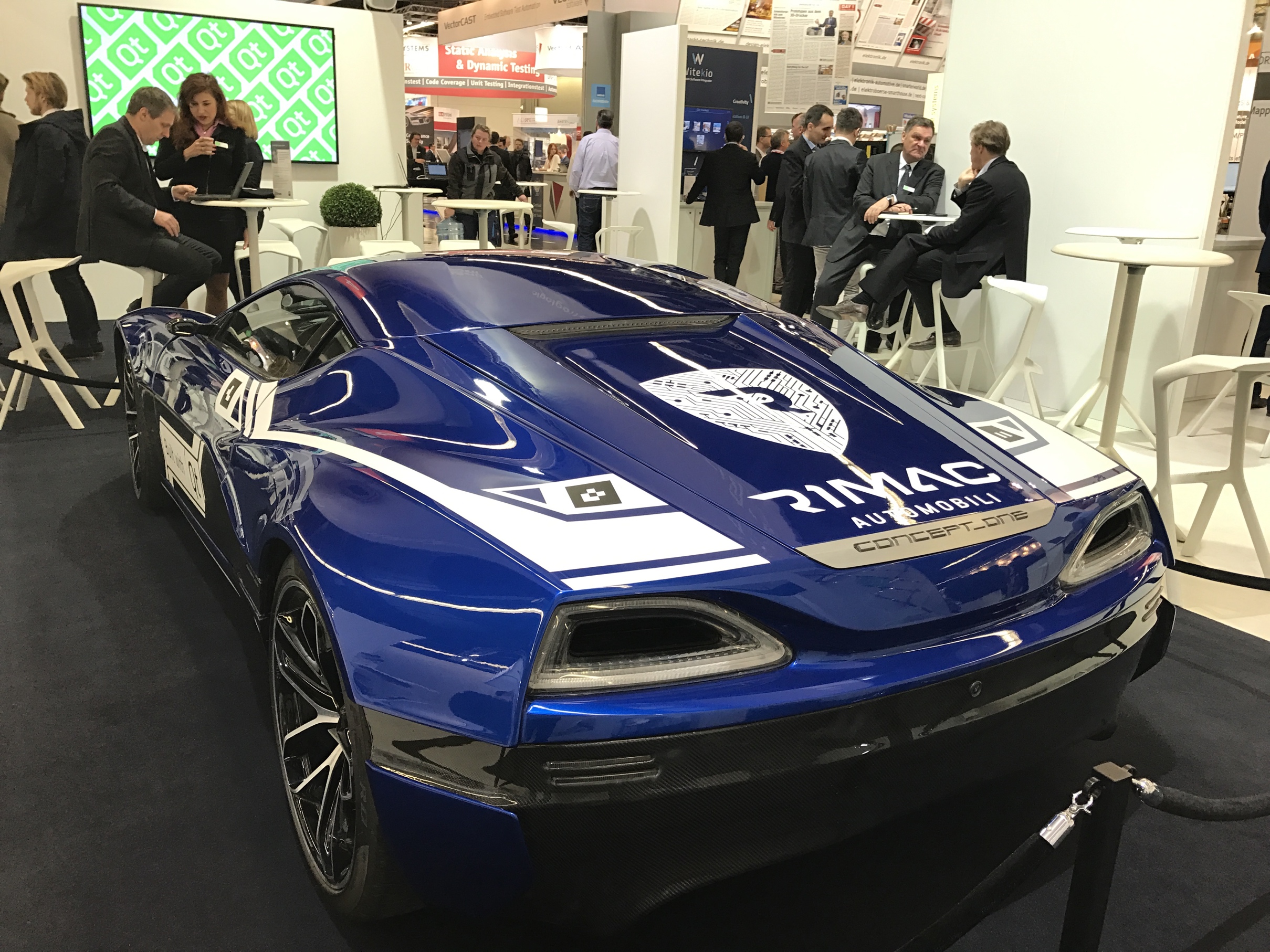 Rimac used Qt for developing internal systems of the car (UI, gathering information from sensors, interaction with the server): 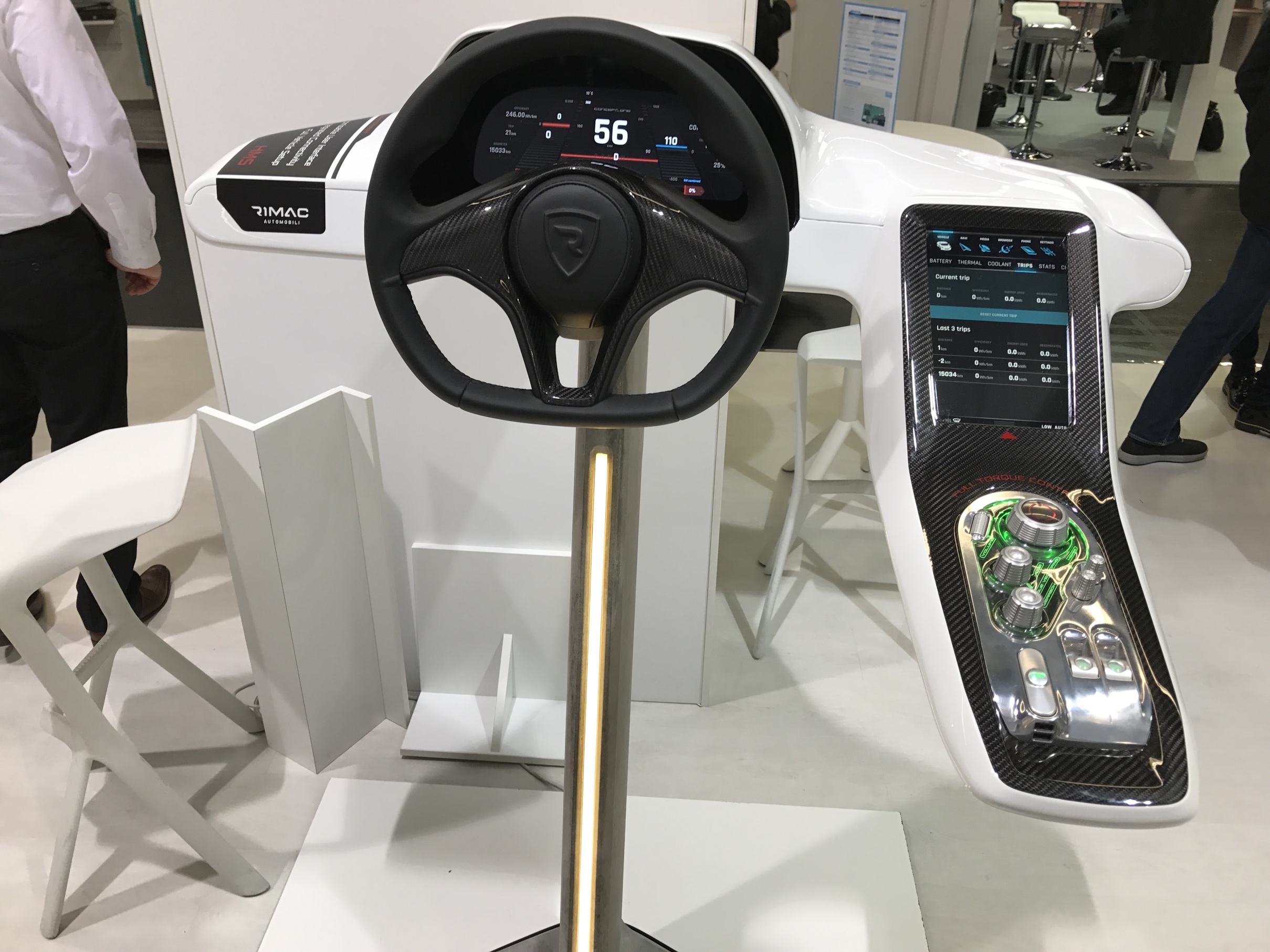 Well, that was a big event, and each time Qt gets more and more noticeable presence there, which is good. Like one of our developers said: “Not bad for a company that started as a small thing with 6 people on-board”.